Recruiting Conversion Rate - What is it and How to Calculate it?

Any successful recruitment and HR strategy usually includes some mention of a recruiting conversion rate. That’s because, when it comes to hiring top talent, the highest expenditure often doesn’t translate to the highest performance. Recruiting conversion rates are an effective way to measure just that: the most effective sources for attracting and retaining top talent for your organization.

How to calculate the recruiting conversion rate? 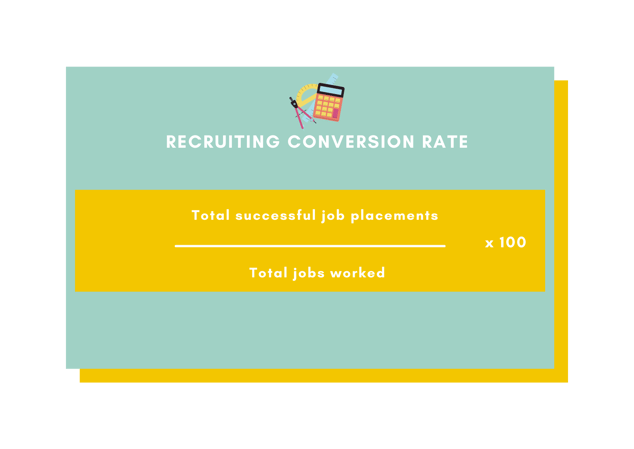 Diving more into conversion data can be quite impactful in helping teams make better decisions, cut costs, and improve efficiency.

The higher the conversion rates, the better. Why? It means that you are getting a stronger return on the time, and money, invested by your team. That being said, make sure that your analyses of recruiting conversion rates are contextualized. For example, recruiters looking to hire for permanent positions should naturally be held to lower conversion rates than someone working entirely temporary positions, where the latter is differs tremendously in both difficulty and efficiency of hire.

Other considerations to consider when looking at recruiting conversion rates include:

Take a look at this article for more recruiting metrics used to assess the success of recruiting processes.

By calculating and assessing your recruiting conversion rates, you’ll be better positioned to identify and resolve inefficiencies in your recruitment processes and help educate your team as to how they can do better.

Tracking and optimizing key HR metrics, like the recruiting conversion rate, is one of the most important factors behind driving consistent improvement and workforce optimization (especially in the modern context).

Yet while the importance of data and analytics is widely known and even accepted, today's users aren't getting the value they expect from their investments in analytics.

That's largely because, in our attempt to make analytics fast, powerful, all-seeing, and all-knowing, we've also made them incredibly hard to use. So complex that only experts can make something of their data.

It's vital, therefore, that analytics are made easier for business people (and HR teams). That's what we call Guided Analytics: analytics that assist users in understanding data and using that data to collaborate and drive results.

Some of the things to look for when considering guided analytics for your HR function?

BACK TO THE GLOSSARY
Let's see our Success Stories

Over 500 companies fulfil their data journey with Toucan